Video of the MVM Balaton Melges 24 Regatta on You Tube

The official video of the inaugural race of the European Sailing Series is published on the You Tube.
Link: http://www.youtube.com/watch?v=7sV8nzyuaNc

The film was produced by the videographer of the race János Ladányi. www.vitorlastv.hu

END_OF_DOCUMENT_TOKEN_TO_BE_REPLACED

The Winner Takes it All 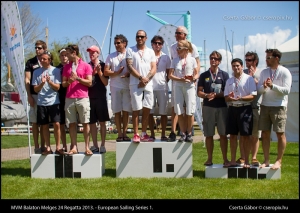 Riccardo Simoneschi and his team takes gold, Austrian Franz Urlesberger takes home  silver medal for the overal and the gold medal for the Corinthian division, while Ian Ainslie’s team gets bronz medal.

Final Results of the Overal Fleet

Final Results of the Corinthian Fleet

After two beutyful sailing day the wind and the weather became even better on Sunday for the last race oof the MVM Balaton Melges 24 Regata. 20-25 knots of southwest wind with bright sunshine made it possible to finish the first event of theEuropean Sailing Series perfectly.

Riccardo Simoneschi’s Audi Team the winner of the first seven races finished just second today so the last race was won by Ian Ainslie’s team Strange Brew. Even this win was not enough for them to overhaul in the overall standings the austrian Corinthian  team Die Weisse helmed by Franz Urlesberger. It’s a great success to them as they finished in front of the majority of the professional teams too.

The competition of the Corinthian teams were won by the austrians in front of the danish team helmed by Bo Boje Pedersen and the best hungarians where the helmsman is Attila Bujáky.

Hopefully next year on the Melges 24 European Championship all will go as well as in this succesful first event of the European Sailing Series.

Breeze On For Final Day At MVM Balaton Melges 24 Regatta

Its hot, its sunny and its blowing over 20 knots!  Bringing on for the final day of racing here in Balaton where the crews have just left the dock for one last showdown race to decide the winner of the opening event in the 2013 Melges 24 European Sailing Series.

Check out the kite surfer at full tilt in the back of our shot.

On the second day of the MVM Balaton Melges 24 Regatta, the inaugural event of new European Sailing Series, the race committee led by Gert Schmidleitner made the best of the nearly perfect weather conditions so the fleet could sail four nice races. 15 to 20 knots of southwest wind was blowing all day in a slightly tricky manner as is usual on lakes.

The clear dominance of the Italian Audi Team has continued. They have an upper edge on boat handling, speed and tactics as well.   Throughout the entire day there were just two occasions when any opponent could reach a mark in front of Riccardo Simoneschi’s team.  As a result the fight was on for the remaining places. Five teams have shown quite similar quality performances on the race course.

After two days and seven races its all change in the overall standings and a Corinthian is now in second place on the overall leader-board. The Austrian team “Die Weisse”, helmed by Franz Urlesberger, has already finished three times in second place and counting one less discard they are clearly ahead of the professionals.

Ian Ainslie and his eclectic inter-continental team including a South African, an Australian, an American and a Hungarian sailor racing under the Hungarian flag plus the Swiss team led by Jörg Hotz have sailed steadily and mostly near the top of the fleet. As a result they share the third and fourth places with minor points differences.

The German Peter Glöckel (helped by the young hungarian tactician Robert Bakóczy) and the Danish Corinthian team helmed by Bo Boje Pedersen have sailed nearly as consistent on the second day’s races just missing the beat on the second race. So they are now a step behind in fifth and sixth place overall but still in contention for third place.

As seven races are now sailed only one remains to finish the MVM Balaton Melges 24 Regatta on Sunday.  The forecast for the final day promises more excellent conditions to ensure a spectacular finale to what has already been an outstanding opening event for the 2013 Melges 24 European Sailing Series.

Click here for the provisional day two results (protests are still being heard so these may be subject to change).

Notice To Competitors No 2 Published

Notice to Competitors No 2 has been published with information about today’s crew reweigh and tomorrow’s competitor briefing and racing times.  Click here to view.

The haul out list for the visiting boats here in Balaton has been published.  Local boats will wait until last and those with the furthest to travel will come out first.  Here is the list: